Community on Columbia (aka The Block) is a church and Christian community formed from several home Bible study groups that meet and live in a transitional neighborhood near the Lakewood area of east Dallas. (We also include in our fellowship a network of independent Bible study groups scattered from North Carolina to England, and individuals who listen to our podcasts around the world).

For more than 35 years we operated under the umbrella of Trinity Foundation, a non-profit foundation whose main focus has been to investigate fraud in the religious world, as well as promote the Dallas Project for the homeless and publish The Wittenburg Door Magazine.

In 2009, the board of the foundation and the members of the community felt the Kingdom of God would be better served by Trinity narrowing it’s focus to only the investigations. So the Bible study members formed an independent church, and took over the mission to help the homeless.

Community on Columbia has the nickname of The Block, since that’s how we’ve referred to ourselves for years. Trinity Foundation is still our favorite non-profit. We continue to support its activities. In fact, some of us are employed there and others regularly volunteer to help. But we’re two separate entities now.

Elders on The Block are Ole Anthony, along with Gary and Judy Buckner and John and Joysanna Rutledge.

There’s a schedule of our meeting times in the right-hand column, along with a link to a map to our location. You’re invited to join us then, or just stop by for brunch on Saturday mornings.

You can read our church constitution here.

A Word About Community

Living in community demands unfeigned love of the brethren. Love that can’t be faked. 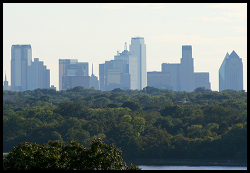 Jesus addresses God as “Our Father…” instead of “My Father…” in the Lord’s Prayer. He was assuming a community or family relationship among his disciples.

Believers can’t live isolated lives. Faith in Christ leads people together in a koinonia or sharing of their lives with each other. To confess our faults one to another, to bear each others’ burdens, to admonish, build up and encourage one another– these all require lives that are radically intertwined.

To properly be the church, we’ve got to spend time together, really know each other. The lives of church leadership and members have to be mutually transparent and subject to accountability. This can only happen by living intentionally in community.

The first Christians “had all things in common” (Acts 4:32). This isn’t talking about communism, but about a willingness to be open and honest as well as to give to meet need. Among the brethren the ideal is, “He that had gathered much had nothing left over and he that had gathered little had no lack” (II Cor. 8:15). Once that sinks in, then the community can extend it’s hand to the poor around it and meet needs around the world.

We subscribe to a lifestyle based on this premise: “Whatever I have that you need, I’ll give it to you. Whatever you need that I don’t have, I’ll help you obtain.” That’s community.?

1 Response to What’s The Block?