For most of its existence, the Christian Church has been unaware that it is surrounded by a pulsating cycle of seasons and celebrations ordained by God … a wellspring of revelation just beyond its reach. 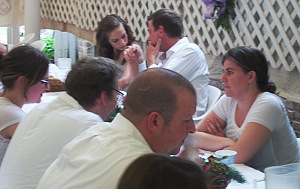 It has tried to set a rhythm of its own with “holidays” and liturgical observances, many taken over from pagan celebrations. But even Easter, the oldest and most revered observance, vibrates slightly out of sync with the ancient and powerful beat of time, because it has been cut loose from its moorings.

Ancient civilizations from Sumer to Egypt geared their whole society to the mystic wheels of life and fertility. Times of sowing and reaping, birth and death were mysteries, at once dangerous and holy, and became the seed beds of religion. The tribes and clans of primitive society acted out, in rituals of initiation and sacrifice, their response to the overpowering drama of nature.

Their awe became centered on gods they could worship. The gods they formed in their minds became gods they formed with their hands–visual objects of their own creation that at the same time blinded them to “the invisible things of God” revealed by His creation around them. The process of idolatry continues today on a larger scale and with different labels.

In the desert of Sinai 3,500 years ago, the Law given to Moses consisted mostly of instructions on how to observe a cycle of feasts that would be celebrated “in perpetuity” to mark these seasons–tent pegs to hold together the universe and the concept of eternity.

The writer of the Book of Hebrews emphasizes that the Law, including the feasts, is a “shadow” of reality “and not the very image.” The feasts were not ends in themselves, but pointed to something beyond. Christ’s life, death and resurrection fulfilled the Law, including the feasts. His presence in the hearts of believers fulfills the Law in them now.

Modern Christianity has been cut off from an appreciation of this truth, in part by the technology that permeates our culture and desensitizes us to nature. But more importantly, because the church decided early in its history to sever all ties to its Jewish roots. The result–ignorance of the Law has been devastating.

THE MEANING OF THE FEASTS

Each feast reveals a piece of the mystery like a piece of a jig-saw puzzle in time. When the picture is complete, we find ourselves gazing at a portrait of Jesus Christ. With that understanding, every activity in our life is part of the celebration and thus becomes holy service to God. Without it, all activities are pseudo-events and remain only idol worship.

At three of the feasts–Passover, Pentecost and Tabernacles–every Israelite was required to gather at the place appointed no matter where they were or what else they were doing, or be cut off form the people of God. This became God’s primary way of keeping Israel from mixing with the world, and insured their sanctification even when scattered in the diaspora.

The eight major feasts correspond to events in the life of Christ and to spiritual events in the life of believers. Whole sections of the New Testament cannot be fully understood without knowing what was going on during the feasts. Many books and passages in the Old Testament were read only on feast days. The feasts are keys to biblical exegesis, but in its ignorance the church has tended to place its own private interpretation on scripture.

How was this treasure lost?

All Christians celebrated the feasts until the time of Roman Emperor Hadrian. In 132 A.D. the Jews made one final attempt to oust the Romans from Palestine. When this rebellion was crushed in 135 A.D., Hadrian forbade the reading of Torah and the celebration of these feasts throughout the empire and persecuted the Jews.

It was at this point that the church began to cut its ties to things Jewish, eventually neglecting the Sabbath for a Sunday celebration, adopting rituals form pagan sources and co-opting the fertility rites of the Babylonian goddess Ishtar (Easter) to mark His death and resurrection.

Through 20 years of biblical study aided by insight from historians, the Jewish oral law in the Talmud, and the Jewish mystical tradition recorded in the Kaballah, we feel we have rediscovered, by the grace of God, the lost links between the Jewish feasts, the New Testament and the life of the Spirit.

We have tried to duplicate the way the feasts were celebrated by Jesus and the disciples, recreating the atmosphere and internalizing the experience in the light of the revelation of Christ. Each year we have learned something new, and more than 150 hours of teaching have been recorded on this subject. Our desire is to disseminate the information to the church throughout the world, and let each group of believers share the experience themselves.

Though some of the information has been known by this or that scholar, it has never been put together and presented as a whole to a wide audience, because its importance has never been realized. But the time is past due.

HANUKKAH: The festival of lights and feast of dedication of the Temple. Christ was announced and conceived by the Holy Spirit in Mary; Christ is conceived in each believer.

ROSH HASHANAH: The feast of Trumpets marking the creation of the world and of the new year. Scholars have pinpointed this as the time of year when Christ was born; represents the new birth of believers.

YOM KIPPUR: The Day of Atonement, a time of great repentance. Christ was baptized by John the Baptist while this feast was being observed; corresponds to the baptism of a believer. As the high priest was sending the scapegoat into the wilderness to remove the consciousness of sin from Israel, John saw Christ and said, “Behold the lamb (goat) of God who taketh away the sin of the world.”

TABERNACLES: The last feast of the year and the season of weddings, marked by burning massive lamps, ceremonies mixing wine and water. Christ turned the water into wine on one Tabernacles feast, was transfigured on another, and identified Himself as the light of the world and the living water during His last. It represents the transformation of the believer’s mind to understand he is “seated in the heavenlies” and outside the bands of time. The feast also marks the end of time itself and the marriage supper of the Lamb.

PASSOVER: This feast pictures the Jews being “passed over” by the death angel and their escape from Egypt. Christ was crucified on Passover, and He is the lamb sacrificed and eaten in the “Seder” meal that became the Lord’s Supper. The meaning of all the feasts is combined in Passover.

UNLEAVENED BREAD: Celebrated to remember the “bread of affliction” in Egypt. Christ was buried during this seven-day observance. In the Passover seder, unleavened bread represents Christ’s body, which is our sustenance.

THE SABBATH: The day of rest from labor. Christ was the only one to ever keep the Sabbath completely, which He did at rest in the grave. Believers do so by “reckoning themselves dead.”

FIRST FRUITS: The first sheaf of grain from the fields was offered to God. Christ was resurrected on this day, and it represents Christ’s resurrection in the hearts of believers.

PENTECOST: It is always connected with he ascension of Sinai by Moses and the giving of the Law, as well as the Shekinah glory filling the Temple. Christ poured out His Spirit on all flesh during this feast after His ascension to the Father, so the Law could be written in the hearts of believers, and the glory of God takes full residence there.

This site uses Akismet to reduce spam. Learn how your comment data is processed.