How did Jesus and his disciples study the scriptures?

As observant Jews in first-century Palestine, they were present each Sabbath as a Torah scroll was unwound to the appointed passage, and seven members of the congregation read aloud about three verses each. 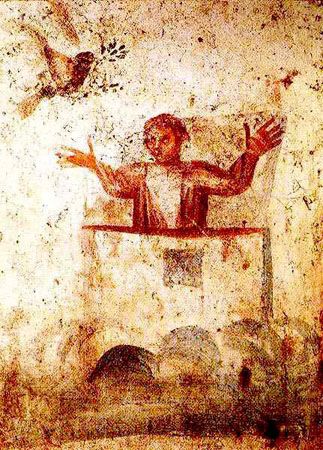 Noah in the Ark, from the Catacombs of Sts. Marcellinus and Peter, Rome

Then appropriate passages from the Prophets were read, usually ones that had Messianic portent or which added to the understanding of the Torah passage. The Psalms were also believed to be collected into five books that corresponded to the five books of the Torah.  Then someone was often asked to deliver a homily on what was read, as Jesus did in the synagogue at Nazareth (Luke 4:14-30). After Aramaic became the common language, a “targumist” was on hand to paraphrase the Hebrew so that everyone could understand.

Many congregations in the early church would have continued the practice.

Much is still unknown about the way these readings were conducted, but a good case has been made that in first-century Palestine, the Torah was read through twice in seven years, with each reading taking three and a half years to complete.

The correspondences between the Torah, Prophets and Psalms passages are often unexpected and remarkably illuminating. Combined with New Testament passages, they clarify many of the sayings of Jesus and bring obscure references into the light.

Jews living in the Diaspora, though, had little connection to the land of Israel, and no way to implement the sabbatical command to let the land lie fallow every seven years, so they gradually adopted a one-year-cycle of readings, particularly those living in Babylon. After the destruction of the Temple and later expulsion of most Jews from Palestine, more Jewish groups adopted the one-year cycle, until the Palestinian Triennial Cycle structure of readings was abandoned and mostly forgotten.

Since the late 1800s, scholars have been trying to reconstruct the Triennial Cycle readings, using references from discovered manuscripts and ancient commentaries.

We completed a three-year cycle of readings about 25 years ago. In 2016 we began a three-and-a-half year cycle, based on some work done by a Messianic Jewish group that has synthesized research by a number of scholars to produce a workable 3 1/2 year calendar of readings.

The readings for the first year (adjusting  a little here and there to allow time for feasts and fasts) began at Genesis 1 on Rosh Hashanah and we completed that book at Tabernacles, Sept. 30, 2017.

Here is our list of upcoming readings for Numbers and Deuteronomy

Here is our list of completed readings for Exodus and Leviticus

Here is a list of completed readings for Genesis

Links to our notes posted for Genesis begins here, for Exodus here, for Leviticus here,  for Numbers here and for Deuteronomy here.

This will also allow us to raise questions, exchange information and, in effect, to publish our own commentary on the Torah, as well as add to it later, as we uncover more about how Jesus is revealed in the scriptures.

How were the readings reconstructed?

The classical midrashim, including Genesis Rabbah, Leviticus Rabbah, the midrashim based on Exodus Rabbah, Deuteronomy Rabbah, Tanhuma [standard], Tanhuma [Buber]), were all developed around this Palestinian triennial cycle and not around the annual cycle in use by most Jews today.

Liturgical poems written by Yannai in the 6th century provide a wealth of homiletical material focused on the Palestinian Triennial Cycle.

Other citations like this one point to a 3 1/2 year cycle: “The inhabitants of Eretz Yisrael celebrate Simchat Torah only every three and a half years on the day they finish (reading the Torah). The Parashah read in this province is not (necessarily) read elsewhere.” – from HaHillukim, around 600 A.D.

How were passages from the Prophets determined?

There had to be either a linguistic affinity or some intrinsic contextual connection between the initial verses of the Torah reading and the passage from the Prophets.

The messianic message and allusions were most important in the PalestinianTriennial Cycle. More than 75 percent are from Isaiah (especially chapters 40-66) and apocalyptic portions of the Minor Prophets, where prophecies of consolation containing messianic messages predominate.

How do the Psalms fit in?

The Talmud and the Septuagint divide the Psalms into five books, and ancient Jewish authorities (Midrash) assert that these five books correspond to the five books of the Law:

“You search the Scriptures, for in them you think you have eternal life; and these are they which testify of Me.” – John 5:39

“And beginning at Moses and all the prophets, he expounded unto them in all the scriptures the things concerning himself.” – Luke 24:27

The Bible as Read and Preached in the Old Synagogue, a two-volume book by Jacob Mann, 1940

Entry on the Triennial Cycle in Wikipedia:
https://en.wikipedia.org/wiki/Triennial_cycle

A group of Messianic Jews in Olympia, WA, (thanks folks!) have put together an enormous collection of commentary and resources for studying the 3 1/2 year cycle of readings.

Below is a link to each reading for every week, with references to various targums, Midrash and Talmud passages, as well as the New Testament. (They started in the Spring, so disregard the dates).

There is also a page of links to Bible study materials around the Internet:
http://www.betemunah.org/library.html